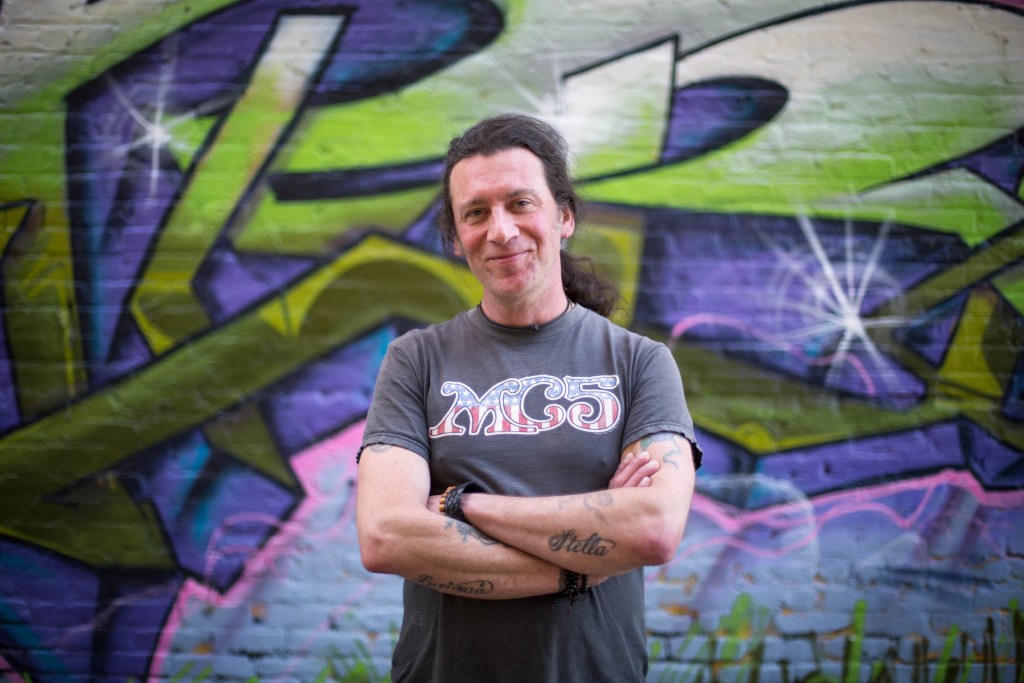 “I’ve been in San Francisco. I was born and raised in Chicago, lived in southern California for a couple years and came up here in ’85. Started making pizza in the Haight. Been playing in bands consistently since then and still doin it.”

“King City, which is definitely a mission band. We’re all generally from here. And a band called the Buddha Brothers, which is Gary Floyd, who was in The Dicks, and Sister Double Happiness. King City is instrumental ragtime cartoon music. The interesting part about that band is we all come from hardcore punk bands or metal bands so we play this whimsical, happy, drinking music. Then with Gary Floyd it’s blues, there’s some country, and some rock. It pretty much spans his whole history.” 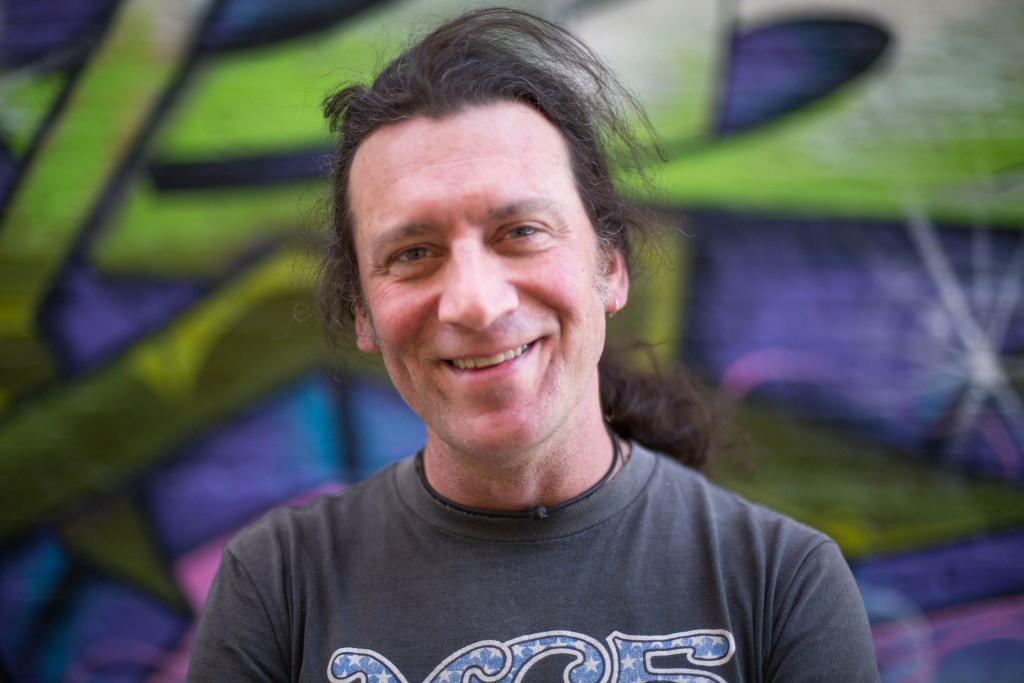 “How old were you when you moved here?”

“Playing music. I came here with the excuse of going to school. I knew that wasn’t going to work out, but I went to USF for a semester and hooked up with a lot of really, really, interesting, great musicians. At that time the mav scene was still happening on Broadway so I got in this band called Osgood Slater. That was ’86-’93. We played in this neighborhood a lot. Specifically at this club called The Chatterbox. The Farm, which was where Potrero ends basically. Which is still there and is used as an urban farm, but back in the day they had huge, hardcore shows.”

“So it sounds like you were living your dream.”

“Yeah, back then. Nobody was making any money but it was all part of the San Francisco, specifically the mission reason why you move here. You move, you do something creative within the community and hopefully your output is going to match your input. People used to move to the mission for art or for music and to get away from whatever homophobic, racist town you came from. It was reasons of personal liberty and freedom. It used to be the mecca for that.”

“Used to be huh? What do you think people come for now?”

“Well it’s the second gold rush, third one really. People come to make money now. Younger people used to come for creative dreams and escape. That’s always been the foundation. Starting with the summer of love and the scene on the Haight. You come and you don’t just live, you’ve gotta be active whether it be politically, or musically, or artistically.” 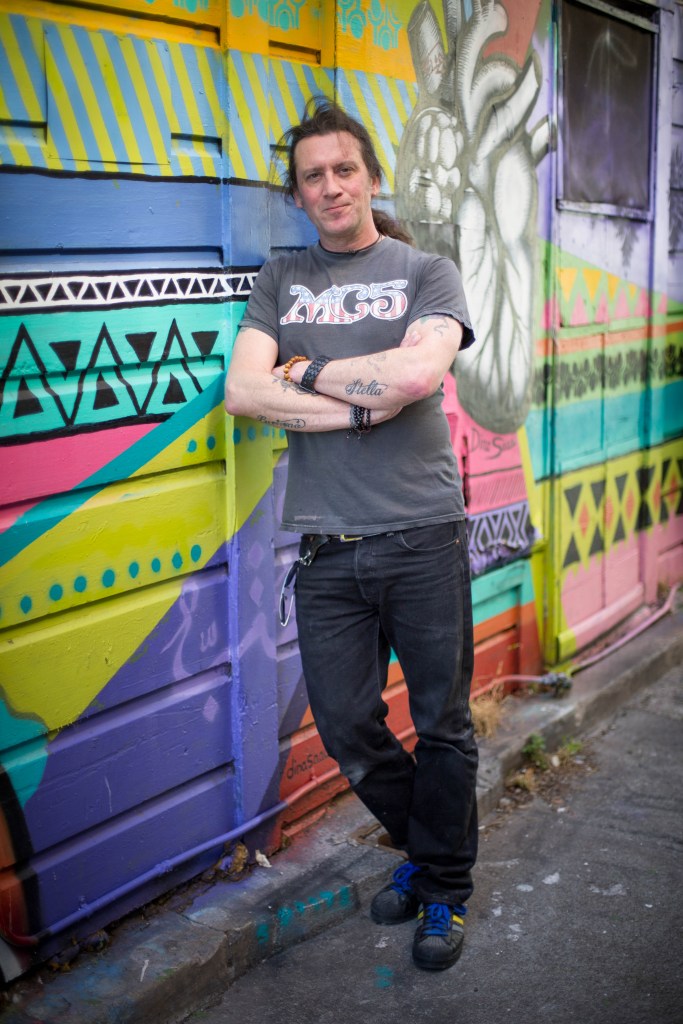 “Over on Bartlett it used to be pretty bleak, it definitely wasn’t a destination location. I’m hoping La Placita will help it stay community. Keep it grassroots. It’s not that I mind all the money and techies, because I’m too old to really care about being bothered, but I do mind that there’s not enough money and creative output coming back into the city. As long as that’s the mission statement of ay community project that starts up in the mission they’re gonna be okay by me.” 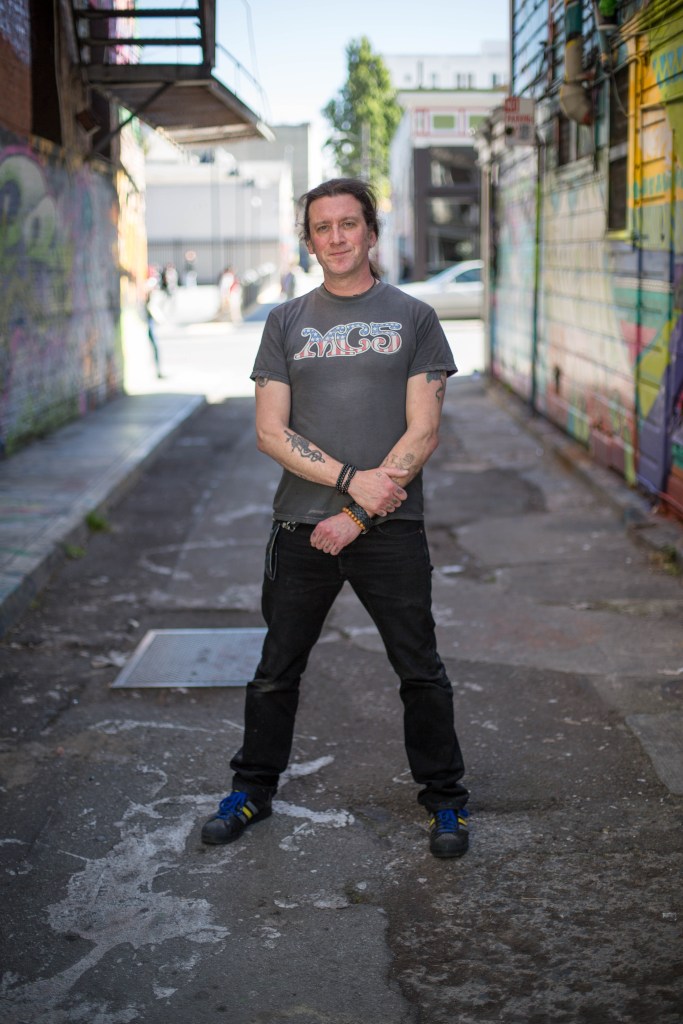 “Now I can say it was great. I’m from what they call the Chicago land area. You’re part of 312 and you can see all the tall buildings but the city kinda sees you as a separate entity. It was great. The weather was awful. I don’t miss the winters or summers. I miss the Spring and Autumn. It’s a great music town. Really great art town.”

“Does your family still live there?”

“No. Most of my family is passed on. My father was an artist. A painter. It was great to grow up with a person who was doing art all the time in the house. And then you get on the train and you go a couple miles down and you’re looking at Frank Lloyd Wright buildings. Everything about that city is really architecturally and artistically beautiful. It’s a great place, but this is my home. I love San Francisco.” 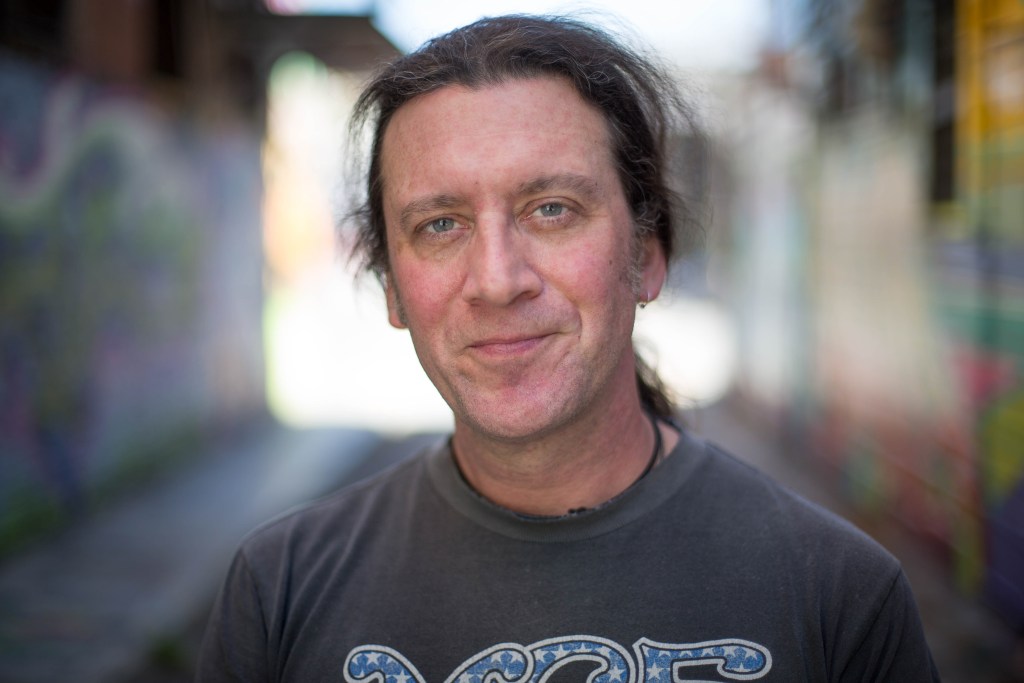 “These days I try to have a real Buddhist outlook on the whole city because I’m really grateful I’m still here and that I’m raising two kids. My kids are able to go to school here and exist here. We haven’t been squeezed out, we’re really really lucky.”

“What are you kids’ names?”

“What’s your favorite part of being a dad?”

“Just watching them grow up in the neighborhood. They’re really smart creative kids and it’s exciting to watch them absorb all this. It’s not an easy job being a parent, but it’s got its rewards.”

Come out on 4/30 for the grand opening of La Placita at the Mission Community Market: http://missioncommunitymarket.org/